The figure has been a recurring theme in my work since I started painting more than 30 years ago. What moves me forward are the many ways of applying paint and the interaction of line, shape, colour, and texture. The possibilities are endless. The acrylic paintings on this page are on canvas and were created using various methods including brush, sponge, painting directly from the tube, inscribing with the brush handle, and wiping with a rag.

My artwork usually begins with a brush and ink sketch. Each painting develops in its own way and at its own pace. Often, it is as if the images emerge with their own logic and laws. I want my paintings to excite visually first and any meaning or message needs to be secondary. The meaning is something that you the viewer need to bring and meet the artist half way. These paintings relate to the life we live, the life we share.

Robert Pointer, B.A., B.Ed.
Robert Pointer was born and raised in Galt, Ontario, now part of Cambridge. His early interest in art was encouraged in high school. Afterwards, he exhibited in various art shows throughout Ontario. In 1975, he received a purchase award from the Agnes Etherington Art Centre, Queen’s University.

In 1978, he enrolled at the University of Guelph and received the Bachelor of Arts degree in Fine Art in 1981.
After university he operated an art studio in Cambridge producing artwork and teaching painting. A solo show in 1983 at the Shooting Gallery on Yonge Street surveyed a range of his current work at that time. A musician as well artist, he next left painting to join a rock band performing in and around Toronto. After the group disbanded, he settled in Toronto and in 1985, married.
In 1989 he received the Bachelor of Education Degree from the University of Western Ontario. He teaches elementary school with the Peel District School Board.

Robert currently resides in the rural community of Rosemont, Ontario. When he is not teaching, you will probably find him building guitars, playing fingerstyle guitar, designing web sites, hiking nearby trails, or painting. 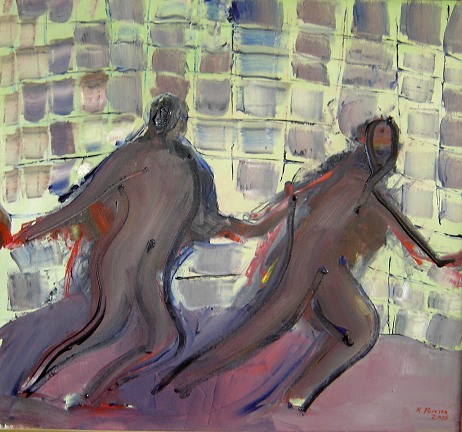